A kinetic physical display with a particular mechanism that makes use of sequential tile rotation for playful tangible interaction. 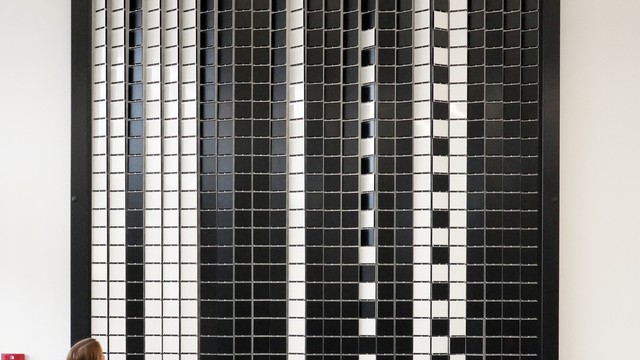 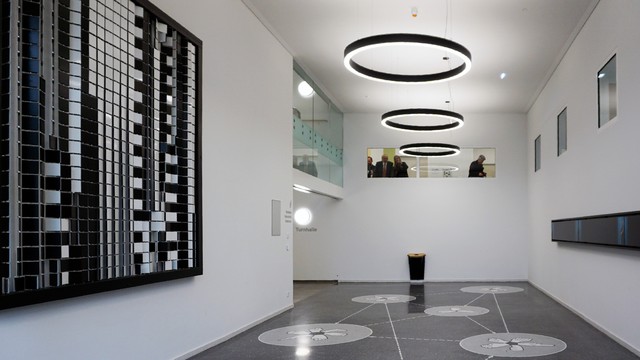 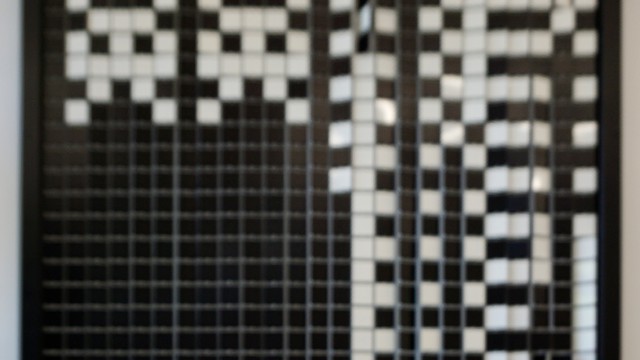 KINEIN is a physical kinetic display mounted on one of the walls of the entrance hall of Joseph Rehrl Schule, a school for deaf, hard-of-hearing, and hearing students and personnel. KINEIN’s purpose is dual; (i) it attracts visitors’ attention in hope to raise awareness regarding the school's particular population and (ii) it engages people in playfully interacting with it. KINEIN differs from other physical displays as its mechanism makes use of significantly less motors than conventional kinetic displays. Its sequential rotation mechanism, hidden in the frame of the display, spins its 625 black-and-white tiles by transferring the movement sequentially via their unusual form factor. The audience can alter the produced image manually by turning the tiles though tangible interaction.

Motion is an ever-present aspect of every life form and a human fascination and wonder since ancient times. Artists, designers, and researchers incorporated mechanical movement in media architecture through actuated interfaces, such as kinetic or shape facades or displays which employ movement of tiles to display images at a rather low resolution. Typically, kinetic installations of such nature actuate each “pixel” individually, a feature that involves myriads of components, complex engineering, perplex programming, and increased costs. In addition, the majority of these media installations is predominantly experienced through vision. This ocular fixation, identified by scholars from various research fields is prevalent in both media and conventional architecture, yet only scarce examples deviate from this norm. KINEIN, a kinetic display of a 25x25 black-and-white tiles matrix addresses both the complexity and lavish nature, and ocular-centrism of preceding kinetic display installations. KINEIN’s tiles are positioned on 25 columns of 25 tiles each. The motion mechanism consists 25 motors, one motor per column and is based on sequential rotation. The substantial motor reduction simplifies the control of the mechanism, engineering and programming-wise, and reduces the overall costs. The installation is placed at the entrance of an integration school and its mechanism constructs a new image daily. The constructed visual representation is contextual, in a fun-fact form regarding the deaf community (e.g., deaf folk sleep-sign, as a type of sleep-talk). KINEIN is designed with tangible interaction in mind, it can be actuated through both mechanical and manual means. The audience has the possibility to tangibly and playfully interact with it to change its visual content while being oblivious to the way the tile actuation occurs. In fact, since the mechanism is mounted in the frame of the installation, the actuation gives the impression of a “magical” happenstance feature.

Technical Concept : KINEIN’s tiles are mounted on each of the 25 metal rods. A stepper motor rotates each rod via a gear and toothed belt transmission system. The mechanism rotates directly the uppermost tile and indirectly the ones that follow. The particular form factor of the tiles transfers the motion sequentially to the next tile in line. Initially, the upmost tile is calibrated to white. To turn a given tile to black the mechanism rotates the first tile 180º clockwise by as many times as the tile’s position (180º*x), whereas for white, the driving mechanism rotates the first tile 180º by as many times as the tile’s position on the column minus one [180º*(x-1)]. Due to the sequential rotation, the movement is transferred to the desired tile. The reduced amount of motors increases the actuation time yet reduces the fabrication costs and the engineering and programming complexity.

Visual Concept : When it comes to KINEIN’s visual appearance, we drew inspiration from airport flip-dot displays and work by Daniel Rosin and Humans since 1982. The colour palette (matte black, glossy white, and metallic) and materials (stainless steel, aluminium, and iron) that characterise KINEIN follow the selection of materials and colours of the surrounding, achieving a harmonious composition. Aside the visual aspect that predominates most media architecture installations, KINEIN can be experienced through tangible interaction and hearing as soon as people are in proximity. Since the rotation mechanism is concealed in the frame of KINEIN, its form invites the audience to have full control over the displayed image by rotating the tiles to construct their own images. Part of the experience is the soft, clicking sound of turning tiles while visitors manually alter the displayed content.