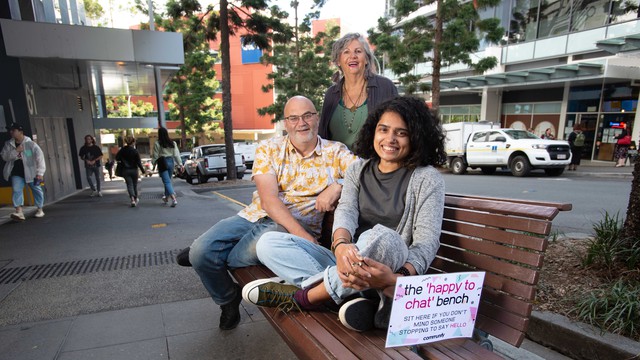 Instead of catching Pokémons on your smartphone, you catch the stories of KGUV!

Inspired by Pokémon Go, the Chatty Bench Project (CBP) is a radical media architecture where Kelvin Grove Urban Village (KGUV) community members developed place-based digital stories during the COVID-19 pandemic. The situated digital stories are built in the DIY ethos (Caldwell and Foth 2014) using Twine (the interactive fiction tool), include digital media such as images, audios, videos as afforded by mobile phone technology and digitally overlaid over the landscape of KGUV. The term “radical” comes from Radical Placemaking (Gonsalves et al. 2020) which emphasizes Freire’s radical/critical pedagogy where KGUV members collaborate to create digital narratives, Ledwith’s views on community development for environmental and social justice where lived experiences can develop movements of change, and a radical departure from conventional placemaking processes where the intangible of memories, stories and sensemaking, are embedded into place through digital tools. CBP is a case of ‘radical’ media architecture where local and marginalised communities engage in critical, creative and hybrid placemaking methods to voice place-based issues and advocate for social justice. Thus, the project represents participatory city-making of alternative urban imaginaries. The 16 KGUV storytellers of KGUV engaged in co-creative and participatory workshops and created situated digital stories on themes of migration, seeking asylum, the first day on campus, love of dancing, anxiety, domestic violence, the experience of studying at QUT, racism, and many more. The situated digital stories are completely made by the storytellers and involved them learning digital storytelling and locative technology. The project is situated in the Kelvin Grove Urban Village and uses its many landmarks and places to serve as engagement locations. The project ended with two exhibitions: one in the virtual environment of Mozilla Hubs and in a face-to-face community barbecue. The storytellers spoke of being part of a temporal community during this time of physical isolation, learning new skills, cross-adaptation of their skills and experiencing empowerment in the process. Those who experienced the stories during the exhibitions spoke of their visceral experiences in place through the stories, of an “augmented” connection to the storytellers and an empathetic understanding of social justice issues even if they are personally unaffected by them. This project is inspired by Communify's "Happy-to-Chat" bench (see 'Issues Addressed'), where the bench is not just for sitting and resting but also a place to interact, learn about other community members and build connections. With COVID-19, the project went completely online and the painting of the benches was postponed. The project ran from July-October 2020 on online platforms of Google Classroom, Zoom and Hubs by Mozilla. All the participants and stakeholders first 'met face-to-face' during the community exhibition in October 2020.