A vortex of water around a mirrored cylinder 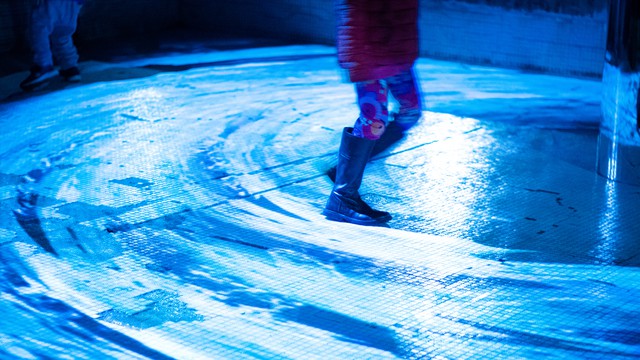 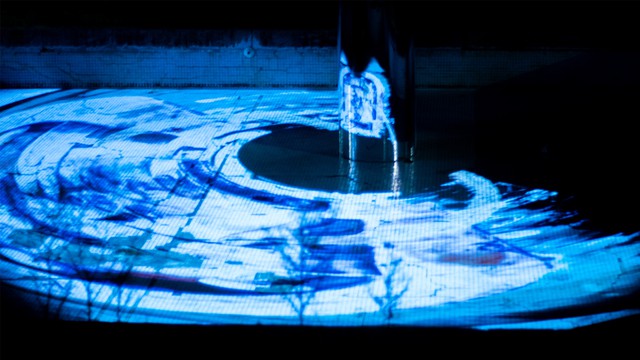 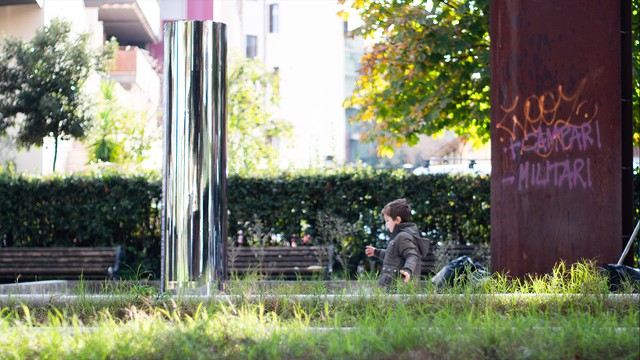 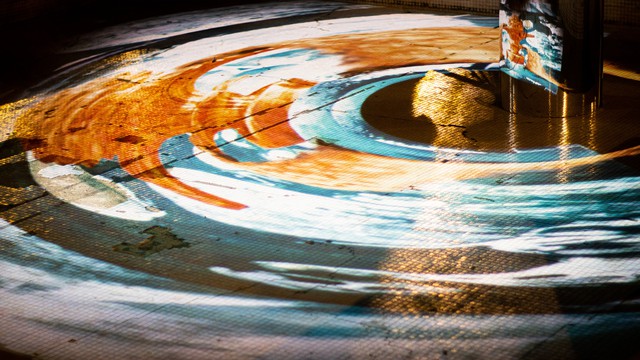 Riflessi is an immersive installation that captures the eye of the public through an infinite and continuous movement. A vortex of water is projected around a mirrored cylinder. Only through the distorted surface of the mirror is it possible to distinguish the true content of the image. The mirror reflects at the same time the surrounding environment, integrating it into the artwork. The topic recalls the use of public water sources in city spaces to be requalified or valorised.

The installation is designed to blend into city spaces to be redeveloped or enhanced. It is suitable for public spaces such as squares, pedestrian streets or abandoned city spaces, but always near a water source. An abandoned fountain was the first location. Around a large mirrored cylinder are projected images that recall water flows. The images can be seen as a pleasant magic, as seen by children, or hidden meanings can be explored, depending on the attention of the viewer. The video content is actually about the maintenance of green areas, the use of public water and water pollution. The effect of endless and continuous movement captures the viewer. Sound is used as a liquid mantra, which tries to convey the continuous flow of water. Manipulated sounds of water and various elements of the surrounding space are trapped in the same vortex to better integrate with the space. The installation has already been exhibited at RGB light Festival Roma 2019 and Skopje Light Art District 2020. The installation has been created by Lea Brugnoli and Anna Torazza. Mother and daughter, artistically work together, creating digital variations of the pre-cinema games. Anna, a cinema animation teacher, has been working on optical games for many years. Lea, a Media Architect with focus on interaction in performative spaces, helps her to transform the games into digital experiences. The music is by Andrea Spontoni, a multimedia artist and an electronic music composer.

Technical Concept : The installation consists of a large reflective cylinder placed directly on the ground. For 220 degrees around the cylinder are projected images, the projector is positioned at the top, close to the cylinder. The video contents are correctly positioned thanks to the video mapping. The installation is an audio-visual loop of about 20 minutes.

Visual Concept : The installation uses an optical effect called anamorphosis: on the ground is placed a distorted image, which has the correct proportions when seen reflected on a distorted mirror. Our innovation is based on the use of moving-projected images, instead of a simple static image. The effect is hypnotic and the spectator has the impression of an infinite and continuous movement. The game of perspective tests the eye of the viewer who, once he discovers the illusion, finds himself surprised and amused. The base of the video is a series of liquid animations that recall water. On this, sharper images are elaborated, with a hidden meaning concerning the use of the territory or the surrounding space. Sculptures, statues, fountains, buildings are just some of the possible examples.